I normally roll my eyes at products that try to appear German by incorporating German words into their name. But when looking for a mechanical keyboard, Das Keyboard 4 Professional was the most appealing to me. I wanted a full-size keyboard with Cherry MX brown switches, dedicated volume, mute, play/pause and previous/next buttons. It was surprisingly hard to find that sort of thing. There are tons of minimal, stripped down keyboards and just as many disco-light RGB “gamer” keyboards with an armada of additional buttons that I don’t need.

So Das Keyboard 4 it was and I am very happy with it. But there was one thing that pissed me off disproportionally. If one looks in the top right corner of the black keyboard, one finds the afforementioned media control buttons, a very nice volume knob – accented in red – and the “daskeyboard” logo in red/white. 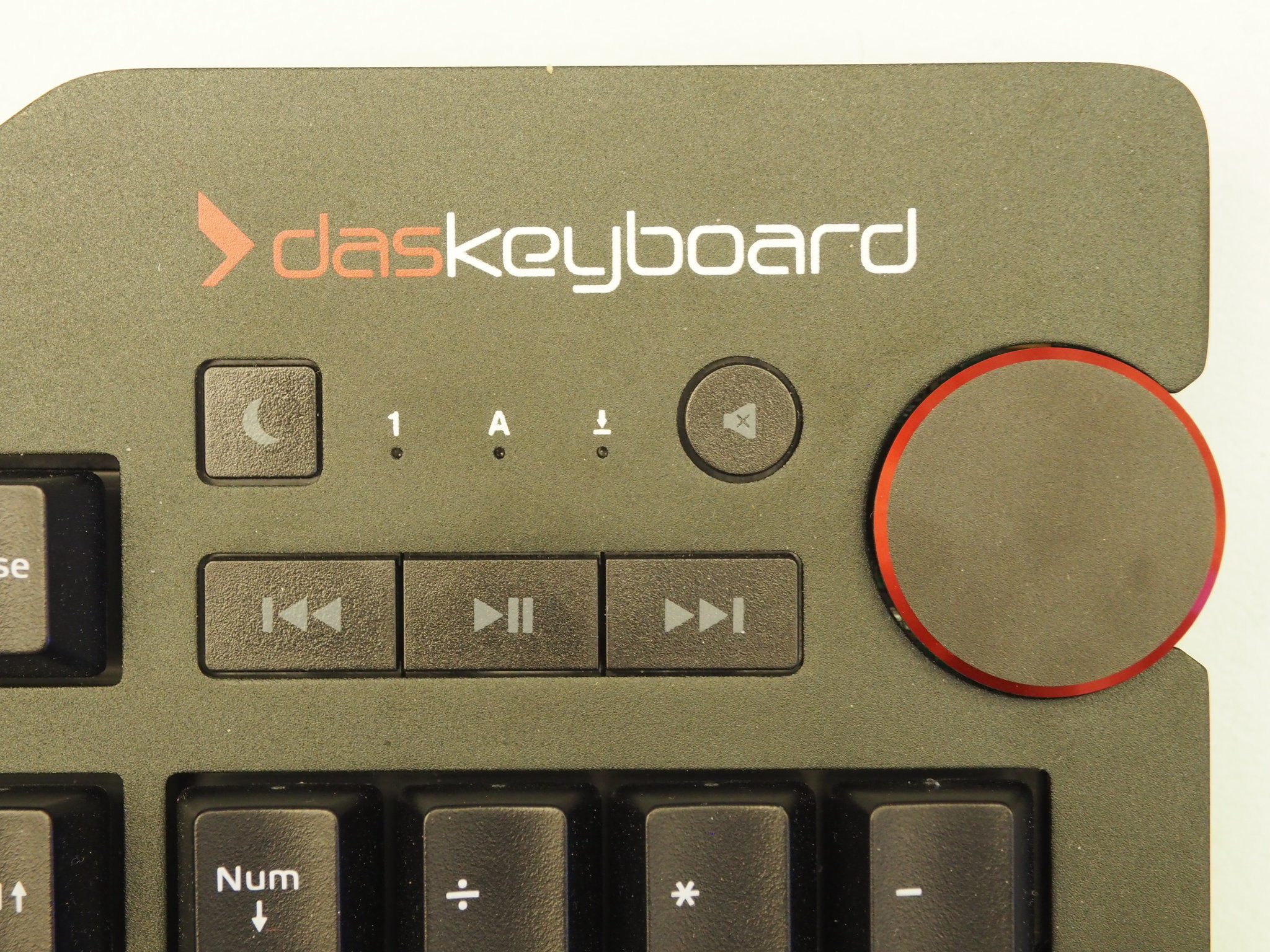 So, with this red/black theme, one would assume the status LEDs for Numlock, Caps lock and Scroll lock are red, right? Right? 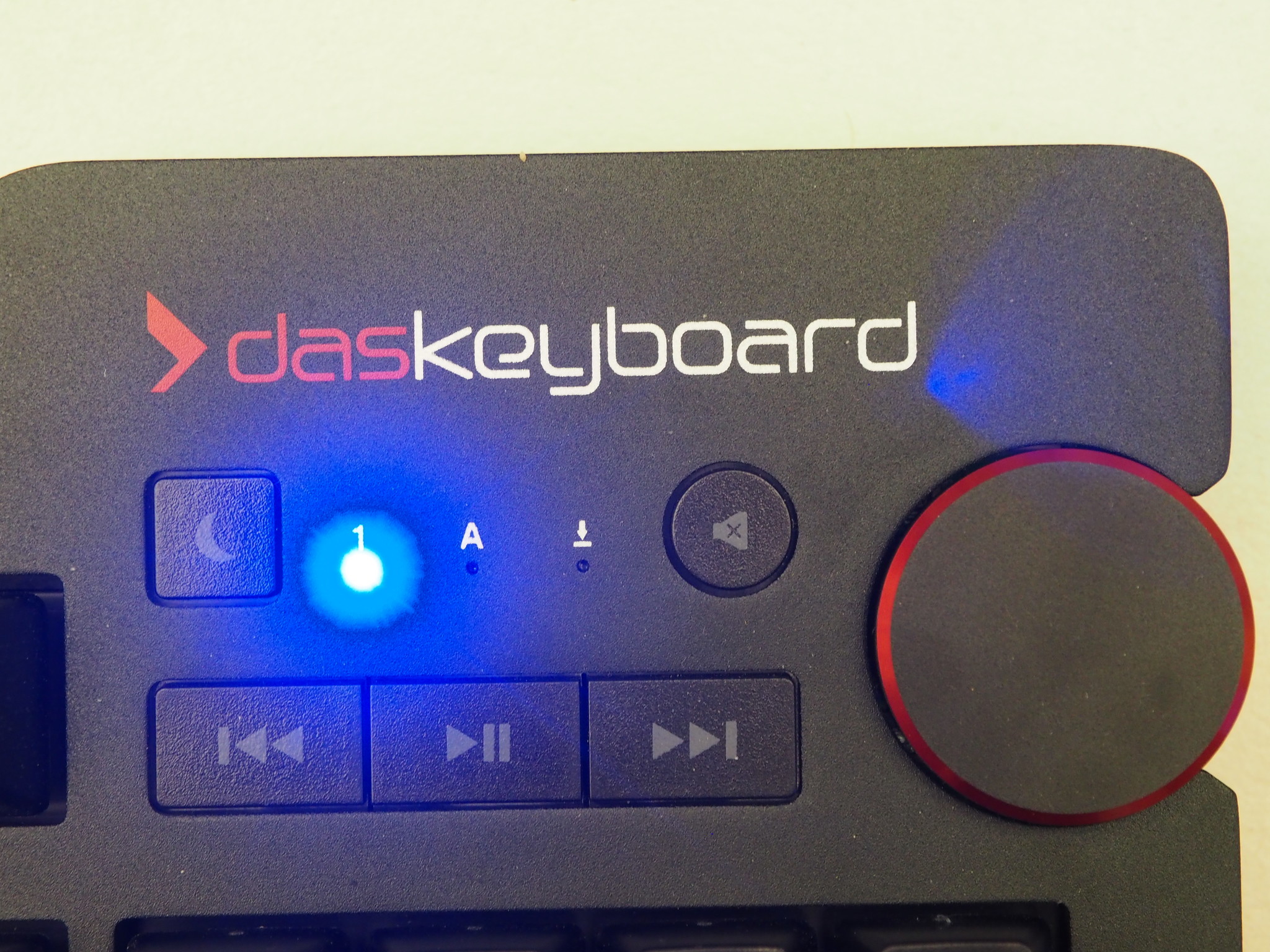 Augh, what is that? Why would you do that? Not only does the blue LED destroy the red/black theme, it is also ridiculously bright.

I decided pretty quickly that I was going to replace those with red LEDs. The tiny holes masking the LEDs led me to believe that I would find SMD LEDs underneath. Desoldering and soldering such seemed like a time-consuming hassle due to my lacking SMD-soldering skills. So I didn’t even open the keyboard up and put it off for “later”.

But then I searched the net, looking if someone else had been bothered by the blue LEDs. And sure enough Gaelan Lloyd already had done exactly what I was planning to do. Better yet, the LEDs are actually plain old through-hole mounted 5mm LEDs.

Freshly motivated I ordered a couple of LEDs in brightness ratings ranging from 4mcd to 11000mcd; not really having a feeling for candela as a unit. Once I got the LEDs, I opened up the keyboard and looked at the circuit. Each LED has a 1k resistor in series and the supply voltage is 5V. The current the LED receives can be calculated by subtracting the forward voltage of the LED from 5V and dividing the result by 1000Ω.

So if your LED has a forward voltage of 1.7V, you will end up with 3.3mA forward current. This means that pretty much any LED can be dropped in place of the blue ones, as the current will never exceed 5mA and most LEDs can easily tolerate that.

I set up a breadboard with 1k resistors and the LEDs I bought. Most of the LEDs seemed similar in brightness, only the 4mcd and the 60mcd LEDs stuck out. Compared to all the other LEDs, the 4mcd LED looked like it wasn’t on at all. But when viewed alone, one could make out a dimm light. But either way, that one was clearly out of the race. 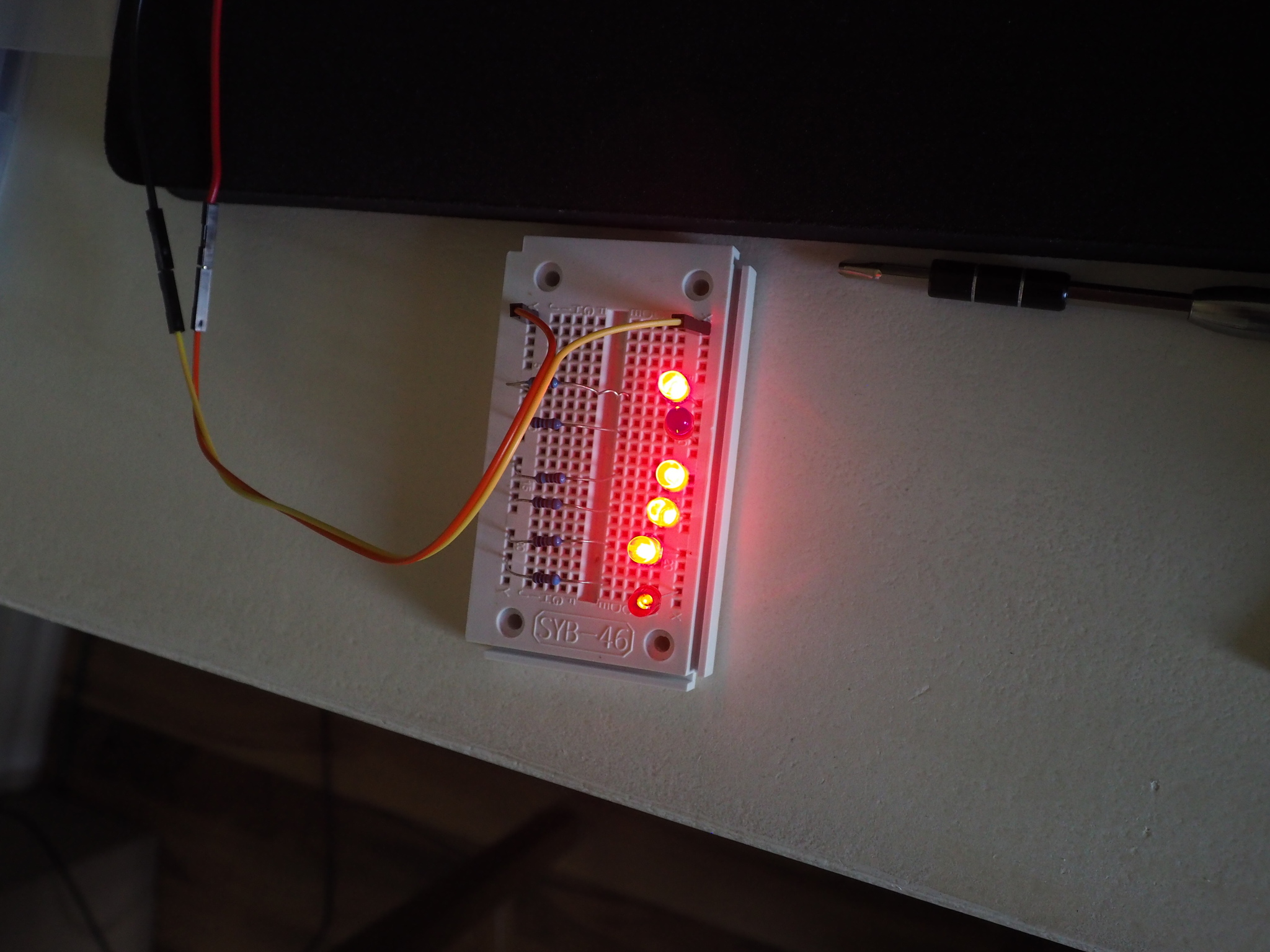 I wasn’t entirely sure which LED to go with, so I tried a side-by-side comparison of the blue LED with the 60mcd LED and one of the other, seemingly equally bright LEDs. 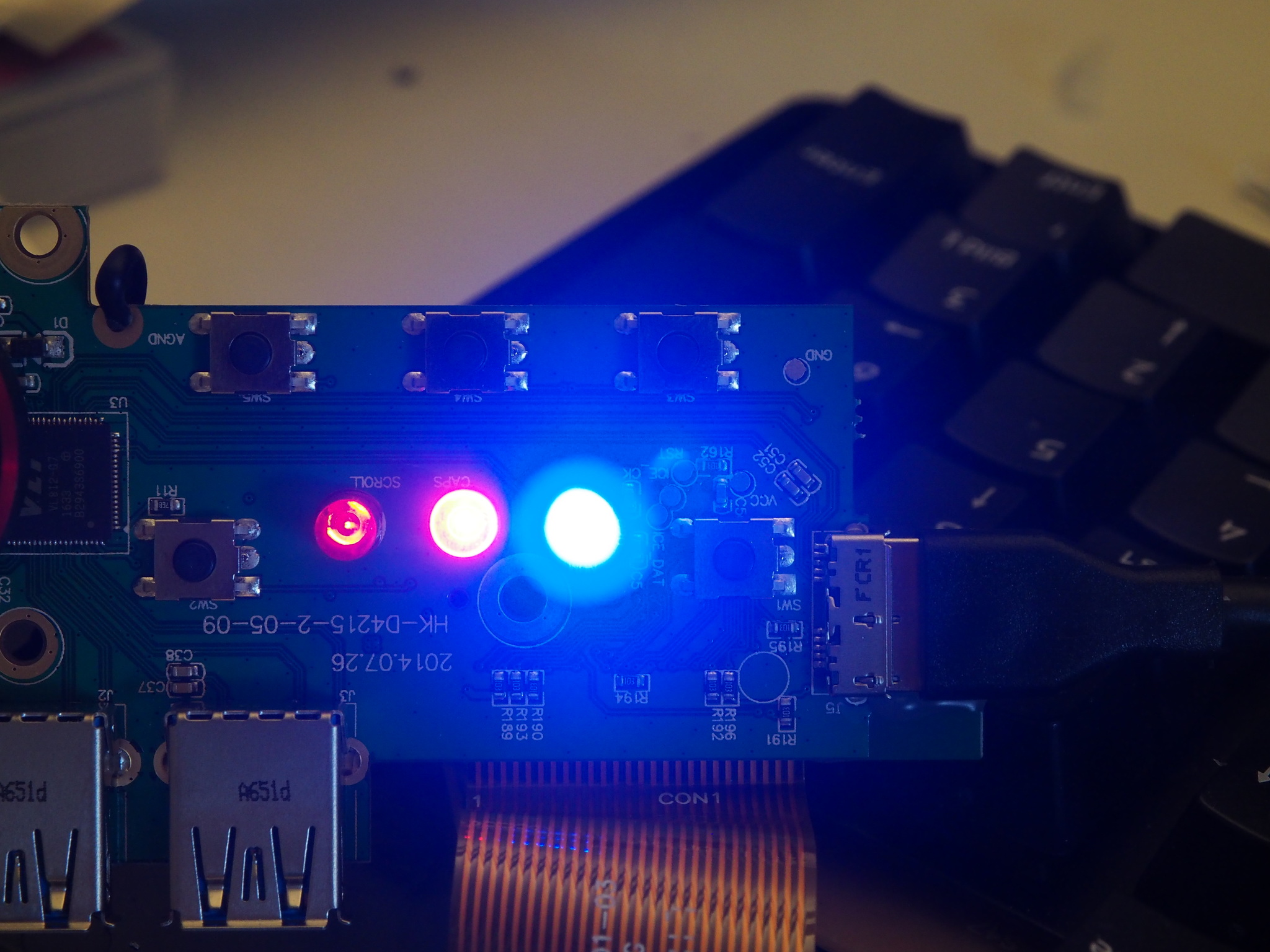 I ended up going with the left one, rated at 60mcd at a viewing angle of 35° when supplied with 10mA. In the keyboard it gets 2.8mA, so it is probably a bit dimmer than it could be. 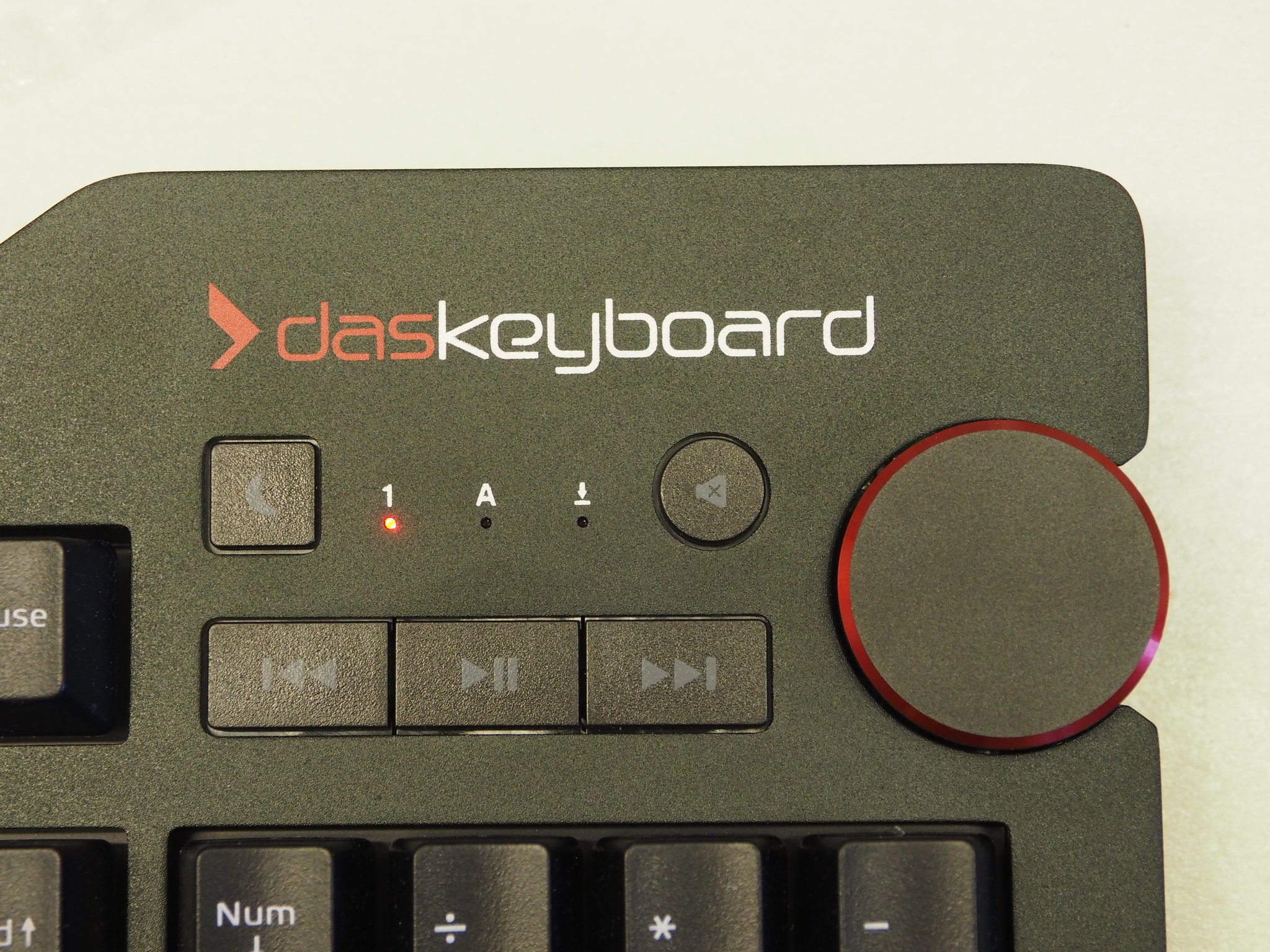 When viewed from the angle I typically have when sitting at the keyboard it is kind of subtle, but still okay

I think an LED that is a little brighter might have been good, maybe 200mcd or 500mcd, but all in all I’m pretty happy with the end result.

If you also want to swap the LEDs, follow Gaelan Lloyd’s instructions.