This post was originally written for my other blog. Since then I have replaced the machine with an HP ProLiant MicroServer N36L running FreeNAS

I have a computer that serves as a NAS. It uses an Intel D945GSEJT mainboard which has 2 SATA ports. At the time I bought it I thought “two hard drives in a RAID1 configuration is all I need”. Well: wrong! For one, the desire to put the operating system on a SSD might arise and secondly, when you want to make a full hard drive backup and for some reason you can’t use the Gigabit Ethernet you could just connect the hard drive to the NAS directly.

Anyway, since the board has a PCIe Mini Card slot I bought a DeLock 95225, which seems to be the only PCIe Mini Card/SATA adapter out there. I have previously had mixed experiences with DeLock products, before switching to a proper SSD for the operating system, I have tried an IDE44-to-SD-Adapter and an IDE44-to-SD/CF-Adapter. For both DeLock claimed they are bootable, however they did not show up as hard drives in the boards BIOS. I could boot from them when I loaded the boot manager (grub in this case) from one of the hard drives and instructed it to boot from the SD card, but that’s not what I consider “bootable”.

So I was a bit worried if this one would finally be the one that show up in my BIOS. It does, but before I got to finding that out, another problem became apparent: 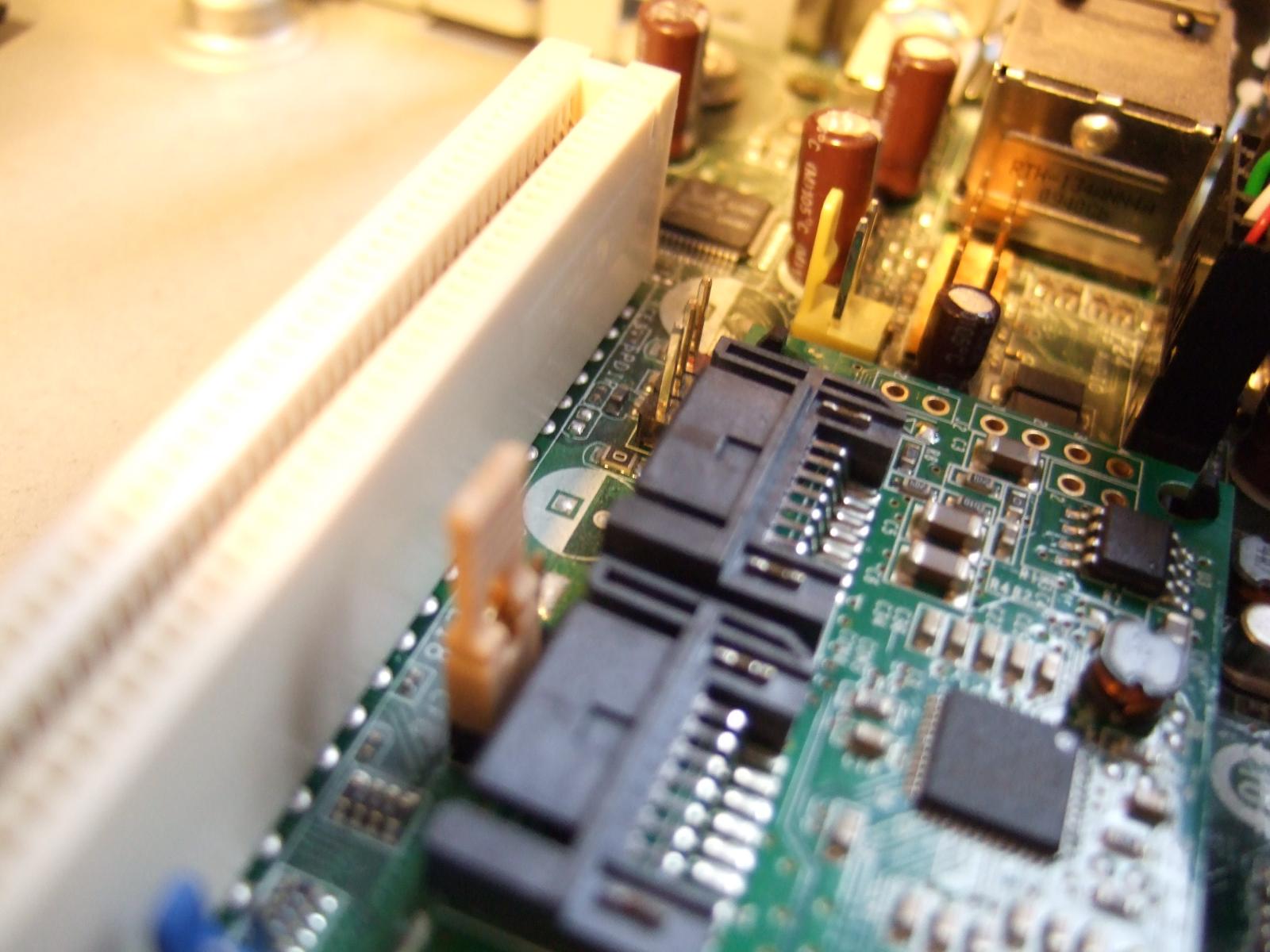 Rather than upwards the SATA ports point to one edge of the adapter board and of course right next to them are pin headers and the PCI slot of the Intel mainboard. There is no way to attach SATA cables there, not even angled ones. However on close examination of the adapter board it turns out the good people at DeLock have either anticipated this scenario, or they wanted to be flexible when it came to components (I think the latter is more likely). Either way, additionally to the SMD solder pads to which the SATA connecters were attached there were through-hole mountings for connectors. So I ordered some Molex 67491-0020 SATA connectors and got busy with my soldering iron. (Side note: I am assuming the mountings for SATA connectors are standardized, so any other through-hole SATA connector will probably work as well. However, I can tell you that the SMD connector Molex 67800-5005 will NOT work, because the soldering leads are too short.) 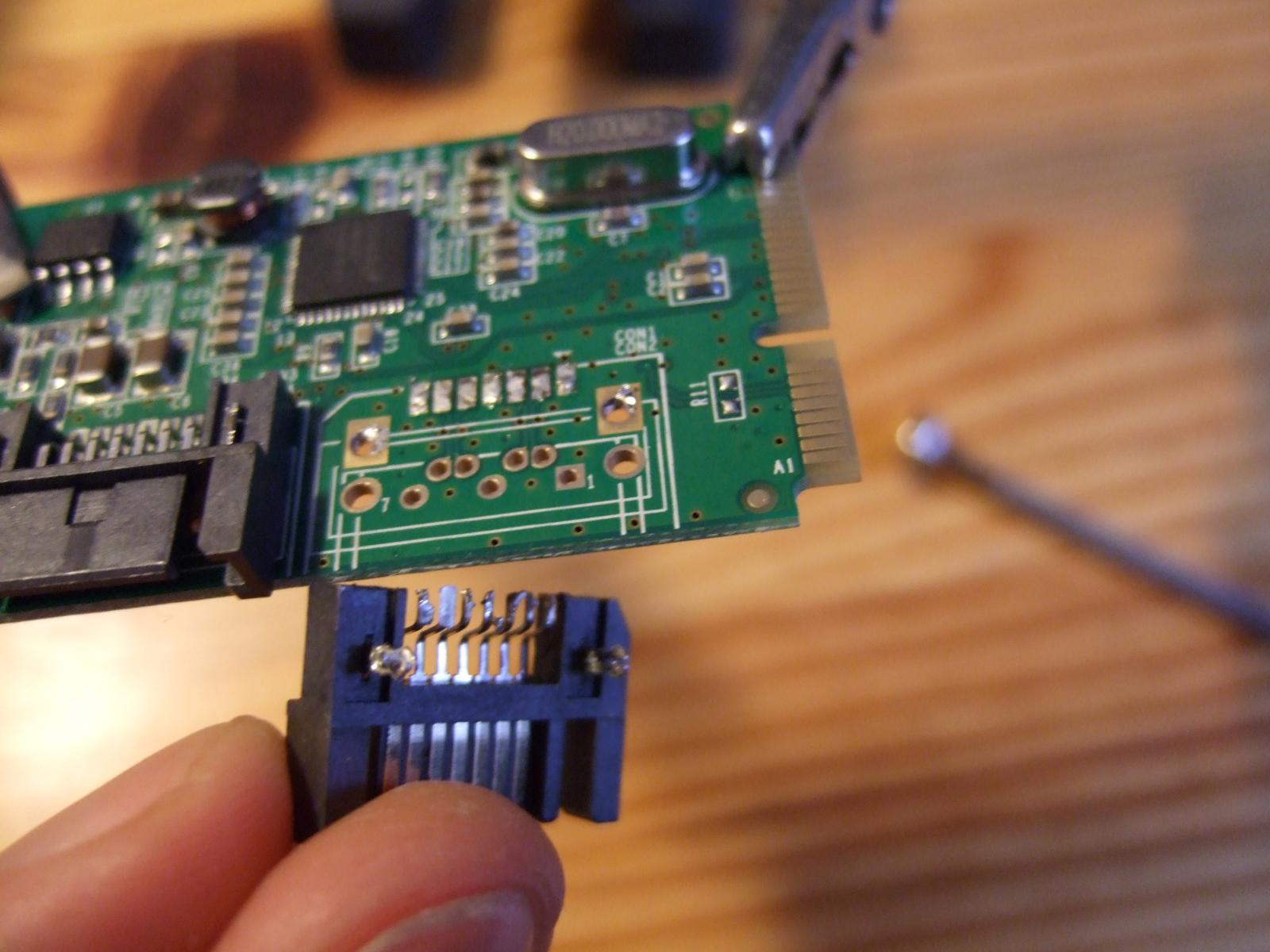 Getting the SMD leads off was a bit tricky, in the end I took the smallest mini screwdriver I could find and used it as a lever against the leads whilst heating the solder with the soldering iron. After that I merely soldered the new connectors on and installed my modified adapter card in my NAS. 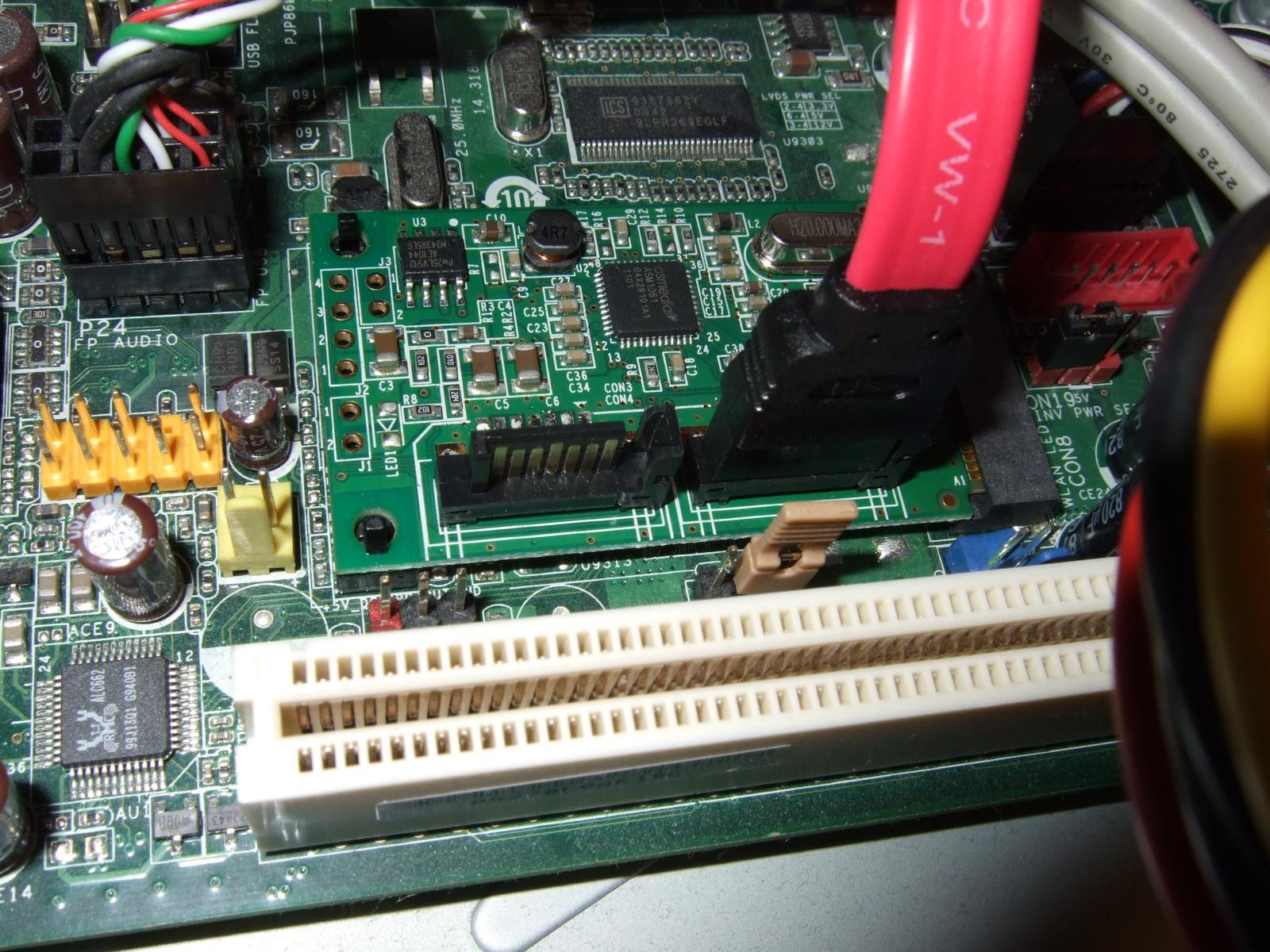 Now that I was able to attach my SSD to the board I was anxious to see if the mainboards BIOS detected it. And lo and behold – it did. So now my NAS has two more SATA connectors and an SSD with the system on it, making it possible to spin down the hard drives when they are not needed. Yay!

Note to self: next time you buy a mainboard for a NAS go for as many SATA ports as possible. At the very least four.